Productivity gains resulting from the performance of new technologies are increasingly helping service economies and investors. With the wider use of data, the productivity gains are likely to come through the optimisation of decision-making by individuals, families, communities, institutions and nations,that result in savings of resources. Unless these benefits are captured in the mediums of exchange, these gains will not be permanent. The quickest way to capture these advantages would be to revalue and empower the world currencies, by making an immediate adjustment to their relationship with the past 20 centuries of inflation (higher money supplies) and the attended loss of value.

Proposal to revalue currencies of the world

Studies by economists of both labor and capital have ignored the productivity gains of the flexible collaboration practiced by humanity over the centuries. In education, technologies and new economies where data might be "fuel" of the future, there is an opportunity to strengthen soceties by revaluation of all currencies in a ratio of perhaps 1:100, which might be reasonable to provide the much-needed liquidity to both consumers and producers. Such a revaluation might mean that a single paisa might be made equal to a rupee. This amounts to a 5% increase in value per year for the past 2000 years. The government can make the change by proclamation on a given date; such as the end of a year,  December 31; and January 1 of the following year; which may become the new norm. This could benefit the poor as well as the rich. To avoid misunderstanding and confusion, new coins and notes may have to be mandated and replaced at several exchanges, with old ones withdrawn from circulation. The exchange would have to be cost-free to the public at large, and minutely planned to ensure minimum disruption. Such a move will restore faith and confidence in the financial systems of the world and help provide the much-needed capital for the repayments of national debts, while ensuring the availability of resources to build the infrastructures. This would enable continuing economic growth proposed in national budgets without the fears of inflation from conventional debt financings.

According to Thomas Piketty, a French economist, one of the causes of wealth inequality is the higher rates of returns given to capital and the lower rates of returns given to labor. This misallocation of valuation of resources is the leading cause of societal unrest and dysfunctional institutions. Future economic prosperity is unlikely to come from either human labor alone or from the capital/savings of the past generations, as both have reached their capacities. Future growth is likely to come from smarter and self-learning algorithms/machines. It is better to capture such productivity gains in the mediums of exchanges that are in common use rather than in assets of unpredictable values such as commodities (gold, silver, rare coins, rare paintings etc.,)  and the benefits should be made available to every member of the global citizenry.

Mathematics for the betterment of humanity

Life, intelligence and every other attribute might be a mathematical phenomena just as the balancing of the cosmos, the genomics, the energy and the subatomic structures of these ‘multiverses’. An economic theory based on the mathematics is likely to serve the needs of humanity better in the long term that any political theories such as capitalism, socialism or communism. It is with this view that research in new fields such as quantum-sociology to help manage humanity’s future is proposed.

Humanity might be less fragmented than what it appears to be, when viewed through the lenses of the media alone. The only objective way to measure the well-being-of individuals as well as collectives might be through the humanities developed through the centuries of human thought and deliberation. By all accounts, with all the discoveries, innovations and collaborations, one has reason to be optimistic and hopeful. Investments in human health and a chance at the eradication of poverty are hopeful signs for the future. The amount of wealth that needs to be expended to achieve these goals can only be found in mathematical solutions of equations that relate mass, energy and universal constants. Without fear or favour they yield results consistently to those that labour over them. With the help of the augmented computing powers of the quantum computer, humanity might surmount this treacherous terrain and gain a foothold in the battle, not only to survive, but perhaps also thrive in spite of the odds against such probabilities.

Create solutions that transform, delight and empower everyone.

Other articles written by Bala Subramanian 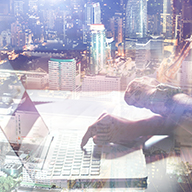